Home » Survival » Emergencies » How to Shelter During a Tornado

In the event of a tornado, you may have little warning, but you’ll need to act fast. Tornadoes are devastating and incredibly powerful storms that can destroy buildings, cars, and trees in a matter of seconds. Above ground or underground tornado shelters are ideal to protect your family.

The best thing you can do today, is act now to be prepared. One of the first steps in tornado preparedness is having an emergency plan for sheltering during the storm. Choosing the right spot to shelter from a tornado can be lifesaving.

We go through the basics of sheltering from a tornado. The best places to shelter from a tornado are often underground, above ground, and in a garage. We can help you can decide on a location that’s best for your needs.

Tornado Risk Zones in the US

According to NSSL, about 1,200 tornadoes hit the United States every year. While every state is at risk of tornadoes, the vast majority of these storms occur east of the Rocky Mountains.

The highest concentration of tornadoes in the United States occurs in an area known as Tornado Alley, a part of the southern central plains. States in this area include northern Texas, Oklahoma, Kansas, western Colorado, Nebraska, and South Dakota. Tornadoes in this area normally occur in late spring and sometimes in the early fall.

Another location in the United States that experiences a disproportionately high frequency of tornadoes is the part of the Gulf Coast and lower Mississippi Valley known as the Dixie Alley. States in this area include eastern Texas, Arkansas, Louisiana, Mississippi, Tennessee, Alabama, Georgia, and parts of southeast Missouri, southwest Kentucky, and western North Carolina. Tornadoes in this area normally occur in late fall (October through December).

Florida is also prone to tornadoes due to its nearly daily thunderstorms. Additionally, as tropical storms and hurricanes in the Florida area move ashore, they often produce tornadoes. However, these tornadoes and waterspouts tend to be weaker than other non-tropical thunderstorms.

Although the majority of tornadoes occur in Tornado Alley, Dixie Alley, and Florida, tornadoes can happen anywhere in the United States, particularly in the Midwestern states. Thus, it is important to be prepared regardless of where you live.

Tornado Seasons in the US

Tornadoes can occur at any time of the year but are more frequent during the spring and summer months when warm air at ground level and rapidly approaching cold fronts create the perfect situation for strong updrafts and downdrafts, which ultimately can form tornadoes. These storms are most likely to occur between 3 p.m. and 9 p.m., so having a plan for tornado preparedness at both work and home is critical.

As mentioned previously, in Dixie Alley and Florida, tornadoes are most likely to occur in early and late fall, respectively. But, of course, tornadoes can happen at any point during the year, so it’s important to constantly be prepared.

Sheltering From a Tornado

The vast majority of injuries and fatalities from tornadoes are caused by wind-borne debris. As a tornado approaches, the most important thing you can do is head to the safest possible nearby location for protection.

Depending on where you are, you may have many or few options for sheltering during a tornado. To help you be prepared to make a quick decision for you and your family during an emergency, we’ll now discuss the advantages and disadvantages of various sheltering locations.

Sheltering Underground During a Tornado

According to FEMA the best protection from tornadoes is in a structure that is built to FEMA or International Code Council (ICC) 500 standards. The best location is in a purpose-built underground shelter, where you cannot be lifted into the air by high winds nor hit by flying debris.

Many houses in Tornado Alley and Dixie Alley have storm shelters which can house moderate-sized groups of people until the storm passes. If your house has one of these places, this is also a great spot to store your tornado preparedness kit of food, water, and other supplies.

Some houses do not have storm shelters, so many people choose to build or install a safe room for protection. The best of these safe rooms are underground, but some may be above ground, too. If your house has one, be sure that it is built to the proper standards and that it is well stocked with your emergency kit in case you find yourself stuck there for an extended period.

Another option for those who don’t have a storm shelters or safe rooms is to purchase and install a purpose-made underground shelter like this one from Granger which can house 3-5 adults in an emergency. These bunker-type shelters are great options for in-storm protection and can be placed in strategic locations. 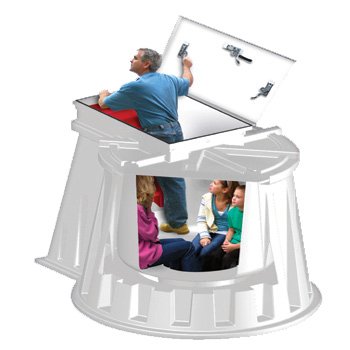 It is important to note, however, that a significant danger to a tornado shelter underground is the risk of being covered up by storm debris. Thus, it is critical that if you plan to use your shelter in the event of a tornado, that you notify family members of its existence and location so that responders know that they should search under the debris for the shelter entrance.

Sheltering Above Ground During a Tornado

If you are not near an underground shelter, you might opt for a tornado shelter above ground in the event of an emergency. FEMA states that the above-ground shelters can provide moderate protection from tornadoes. The best places are within study buildings and are small, interior, windowless rooms.

Some potential options include a closet or bathroom on the lowest level of a building. A floor below ground is best, but not always an option as many homes and buildings do not have basements. Get as many walls as possible between you and the storm and be sure that there is nothing nearby that can fall on your head.

In these tornado shelters above ground, you’ll want to use additional personal cover to protect yourself from falling debris. You should use whatever is available, such as a coat or blanket, to cover your head and neck, in particular. Mattresses are also good options.

You should determine the safest location in your home or office, called the Best Available Refuge Area, before a storm. It’s best to get an evaluation by an architect or structural engineer who can give you reliable and personalized information for your home and office. Be sure everyone in your family or office knows where this location is and can access it with ease.

According to FEMA, there are a number of indoor, above ground locations that do not provide adequate protection. This includes mobile homes and offices and the open space of open-planned buildings (malls, retail stores, gymnasiums).

Additionally, vehicles and the outdoors provide no protection from tornadoes and are best avoided. If you are stuck outside, however, you are safest in a low flat location, not under an overpass or bridge. Don’t try to outrun a tornado in your vehicle, but if you have time, you might consider driving or running to the closest sturdy shelter.

Sheltering in a Garage During a Tornado

In a garage, you have two options for a tornado storm shelter: above ground or below ground.

A tornado shelter garage unit that is placed below ground will offer the maximum possible protection. However, below ground units are more expensive to install and can be problematic for people with limited mobility or who have trouble with stairs and ladders.

Above ground tornado shelters in garages are also great options, particularly for people who struggle with stairs. Many of the options available on the market today are easy to walk into or roll a wheelchair into, so they are accessible for all.

Whether you choose an above or below ground garage tornado shelter, be sure that it meets FEMA and ICC safety standards. Plus, you should also stock your shelter with your tornado emergency kit and enough food and water for the whole group.

Make Sure you Know Where to Shelter!

Ultimately, the shelter you choose in a tornado situation will be dictated by your current whereabouts. However, an understanding of the advantages and disadvantages of various sheltering locations can help you make the best choice in an emergency situation. Preparedness is key, so be sure to determine the best possible shelter in locations you visit frequently, such as the gym, the office, and your home. 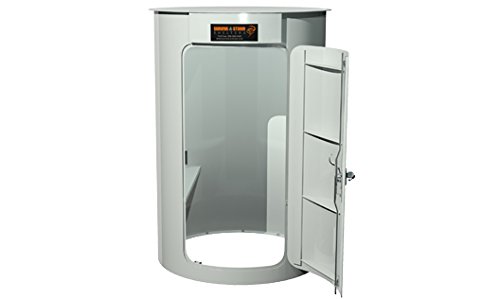 Guide to Pop Up Camper Rental

How To Live In Your Car

How To Live In Your Car

TheSimplePrepper.com is a participant in the Amazon Services LLC Associates Program, an affiliate advertising program designed to provide a means for sites to earn advertising fees by advertising and linking to Amazon.com.