Home » Prepper » Homesteading » 7 Best Places to Live Off the Grid

7 Best Places to Live Off the Grid

7 Best Places to Live Off the Grid

Taking the plunge of moving life off the grid – away from electrical, water, and most transportation infrastructure – is an increasingly popular trend.  Especially for Preppers and those who want to step back from the hyper-modern world. Living off the grid can save you money by eliminating the need to pay for utilities, provide for a self-sufficient lifestyle, and allow you to assert your independence from the rest of society.

For many Preppers who are interested in making a move from their current home, there are a huge number of questions about moving off the grid. The first question: where to go? For better or worse, not all places were created equally when it comes to living off the grid. Some states and towns have made it legally difficult or impossible to live off the grid, while others have so little infrastructure that you likely won’t be the only one in the area living off the grid.

Once you move off the grid, you will be heavily reliant on the land around you for collecting water, growing and hunting for food, and producing renewable energy – so finding a place that has the resources you need can make a big difference in the quality of life you’ll find. Check out these off grid house plans for inspiration.

We’ll cover seven of the best places to live off the grid in the United States to help you find potential spots for your big move.

California is often passed over as a state for off the grid living because people often think of Southern California or the Bay Area, both of which have restrictions against off-grid living. But the far northern reaches of the state have a distinct identity, with relatively cheap land, low population densities, an abundance of natural resources, and a favorable view towards homesteaders. In fact, the Three Rivers area, just across the border in Oregon, is home to one of the largest off-grid communities in the nation.

Northern California boasts long growing seasons thanks to the hot summers, yet the snow pack in the mountains ensures that water is available in the rivers and creeks year-round. The forested mountains also provide a steady supply of timber – this is a major timber harvesting region. It is worth noting that the recent extended drought in the state had dramatic effects on Northern California, so water could become an issue in dry years – and wildfires remain a significant threat each summer.

As for producing energy, Northern California is a mixed blessing. The summers are long and sunny, meaning that solar energy is abundantly available. However, this region also receives the rainy winter storms that the Pacific Northwest is infamous for, so staying powered in the winter may take more ingenuity. In addition, although the winters are not particularly cold compared to much of the rest of the US, the wet winter climate requires that your home be well-prepared to weather major storms.

Vermont may have some of the coldest winters of any of our seven best places to live off the grid, but everything else about the state is perfect for homesteading. The weather from spring through fall is mild and precipitation is distributed evenly throughout the year so that there is no need to worry about digging a well to survive through dry summer months. Natural resources, including timber and rock, are also plentiful almost everywhere across the state – plus, naturally-occurring maple trees present an opportunity for supplementing your food supplies with fresh maple syrup in the fall. Although the Northeast experiences storms at any time of year and Vermont is often cloudy, the state averages over 150 days of sunshine per year, which is more than enough to charge solar panels and connected batteries if your family is willing to use power sparingly. 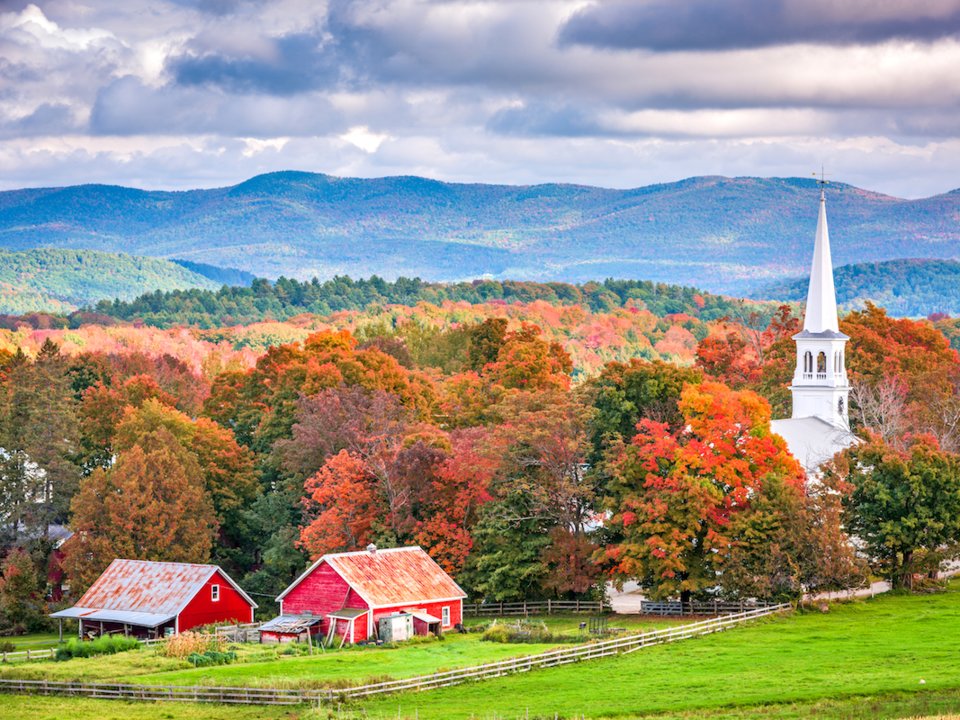 A major advantage to Vermont is that most counties in the state are very friendly towards living off the grid. Although these rules are catered towards rural residents, many of whom can’t afford to pay to connect their homes to the main infrastructure lines along the roadways, they benefit the Prepper looking specifically to live away from the reach of the power companies. In addition, land in Vermont is both plentiful and cheap, so it is relatively inexpensive to purchase a plot of land large enough to house a herd of animals in addition to your home.

Texas is famous for its cheap and abundant rural land, which makes buying a large parcel for your homestead extremely affordable compared to most other states. Having a large plot comes with numerous advantages, including the ability to ranch a herd of cows or other animals and the inclusion of plenty of private property on which you can hunt within your homestead. The warm, dry climate in Texas can also be a major advantage since the growing season is relatively long compared to other parts of the country and you can grow heat-loving vegetables without a greenhouse.

If Texas is your region of choice for living off the grid, though, you’ll need to pay close attention to exactly where you purchase property. Many parts of Texas are arid enough that it will be difficult to naturally irrigate crops or even collect sufficient drinking water without digging a deep, expensive well. These drier areas will also have fewer trees for lumber and less game for hunting, so don’t be fooled by the lower land prices in the desert parts of the state. East Texas, which is mostly pineland, is an excellent region for developing an off-grid homestead, although heartier homesteaders can try their hand in the hills of West Texas. Of course, collecting solar energy will be no problem throughout most of the year no matter where in the state you are located.

It may come as a surprise, but Missouri is actually one of the most friendly states towards residents looking to disconnect from both the grid and mainstream society. Missouri’s laws are extremely relaxed on topics ranging from homeschooling to gun control to sanitation, which means you’ll run into few regulatory issues when establishing your property off the grid. In fact, the state has no laws preventing water collection from streams or rainwater as many other states do, and you are not required to have a septic system on your property in order to legally reside there.

Even better, Missouri hits a nice middle ground in terms of the resources available on the land and its moderate climate. Although land is expensive compared to places like Texas, it remains relatively cheap compared to the national average. In addition, depending on where your property is located and your personal style of homesteading, the land can be used for either ranching or farming with equal success since it is primarily fertile grassland. Timber is also readily available in most regions, as is solar energy given the state’s average of over 200 sunny days per year. Although winters can be cold, the growing season is long enough that most vegetables that do not require extreme heat will do well in the climate.

Much of Idaho is extremely rural, which makes it ideal for living off the grid - many Idaho residents live off the grid, or have neighbors who do. The state has relatively lax building codes for properties, which allows you to customize your homestead with little regulatory interference. In addition, Idaho has abundant hunting opportunities – including large game like elk – and loose hunting and gun control laws to allow you to take advantage of the natural abundance. On top of all that, land prices are very low relative to other parts of the Pacific Northwest.

There are two major dilemmas to making a homestead in Idaho, although both are solvable with some planning and work. The first is that much of the state, including the mountainous regions, are relatively dry and rely heavily on winter snowpack to provide water throughout the summer. This means that your property will likely need to contain a snow-fed creek that is flowing year-round in order to ensure a stable water supply. The second difficult is that the winters are cold and snowy. This means that the growing season is relatively short – and in fact, growing crops at all can be difficult in the arid Idaho soil and mountainous terrain – and you’ll need to heavily insulate your home. However, the abundant sunshine in the state enables you to power heaters with solar energy and adding greenhouses to your property can go a long way towards allowing you to grow vegetables.

Maine is another excellent choice for establishing an off-grid homestead since much of the land within the state is rural, remote, and inexpensive. As for other rural states, this has ensured that the state government is relatively friendly towards living off the grid in its zoning laws and the state has relaxed rules about what you can and cannot do with regards to building on your property.

One of the main advantages to living off the grid in Maine is that the land has an almost endless supply of timber, so you won’t be lacking in building supplies or wood to burn throughout the cold winter. Water is also plentiful, as rain in the summer and as snow in the winter, plus in numerous lakes and creeks dotting the landscape.

The disadvantage to Maine is the cold climate. Although you won’t need to worry about cooling your home in the summer, the growing season is quite short and you will likely need to install greenhouses for most of what you plan to grow. The winters can also be quite brutal, so plan to spend the summer stockpiling wood to burn to keep your home warm.

Tennessee is ideal for living off the grid thanks to the state’s moderate climate, relaxed rural laws, and low property taxes. The climate is gentle compared to many of the other states that are friendly to homesteading, with a long growing season and warm – but not oppressive – summers and cool springs and falls. The winters are also extremely mild compared to states in the Northeast and Midwest. Although many parts of the state are farmed, hunting opportunities, especially for deer, remain plentiful and the state’s many rivers are excellent for fishing. Plus, water, sunshine, and timber are all abundantly available throughout the state to make establishing and running your homestead easier.

Tennessee also has among the lowest property taxes in the nation, which means that even if the upfront of cost of property may seem high, your land will be comparatively cheap in the long run. Rural land is by no means expensive upfront, either, compared to many states in the eastern US. Another advantage to Tennessee is that the state has relaxed laws surrounding drinking raw milk and collecting rainwater, which will make it easier to run your homestead as you see fit.

Best Self Defense Tools for Women

How to Prepare for a Resource Run

How to Dehydrate Cooked Beans

DIY Greenhouse on the Cheap

Honey Powder The Sweetener for Preppers

How To Make A Ghillie Suit

How to Collect Rainwater

How To Make A Snare